The Chinese Celebrate the Arrival of October With National Day 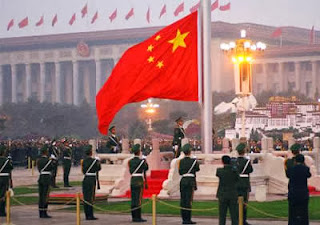 This 7-day stretch makes this the longest Chinese public holiday after the Spring Festival, so people love taking this time to travel. It is also a very popular time for tourists to come to the country to witness the display of patriotism, so if you ever want to visit during this week make sure to plan ahead! The much anticipated week is purposed to commemorate the founding of the People's Republic of China in 1949.

Although the People's Republic of China was technically founded on September 21st of 1949, the ceremony to celebrate this revolutionary formation was held in Tiananmen Square on the first day of October, passing the "Resolution on the National Day of PRC" the following day. 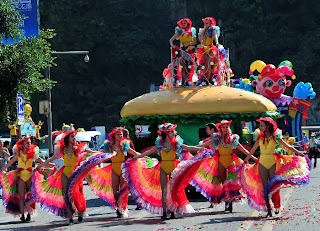 Curiously, even though National Day was not declared a holiday until 1949, the term appears within writings and the Chinese language as far back as the Western Jin Dynasty, which lasted from 265-316 AD.

For people across China unable to make it to Tiananmen Square, there are also many other activities including flag-raising ceremonies, dancing, firework displays, and art exhibitions in many of the towns and cities. For lovers of bargains and discounts, the 7-day holiday is one of the best times to shop, so get your wallet ready!
Posted by Fujimini Island at 9:10 PM 2 comments: 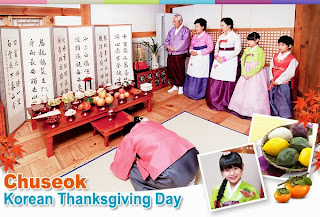 One of America's favorite past times, Thanksgiving, is a time of gathering with family, sharing stories and laughter over mashed potatoes and turkey. This time of year is associated with many traditions that reflect American culture- but did you know that Korea has a Thanksgiving as well?

Like in America, Korean Thanksgiving, known as Chuseok, is also full of deep tradition and culture. Unlike American Thanksgiving which is one day, Chuseok stretches across three. The preparation begins the day before Chuseok and extends till the day after.

One of the most important traditions associated with Chuseok is Beolcho, the clearing of weeds around the grave of ancestors and Seongmyo, visiting the graves of the ancestors. It is considered a duty and expression of respect and devotion to the family. Another tradition 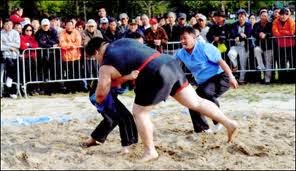 that adds spark and excitement to the holiday is Ssireum, Korean wrestling. During Chuseok the strongest people in each village are selected to compete in a wrestling match. The last one left standing is considered the village's strongest man and rewarded cotton, rice, or a calf as his prize.

The Korean circle dance, or Ganggangsullae, is another critical aspect of the Chuseok celebration. During this ceremony women dress in traditional Korean clothing, Hanbok, and dance in a circle singing and holding hands. This tradition is very significant in Korean history, dating all the way back to the Joseon Dynasty (1392-1910). Clothing worn and food consumed is also very specific during the Chuseok holiday. Chuseokbim is the custom in which the head of each household would buy brand new clothes for everyone in the house, even the servants. 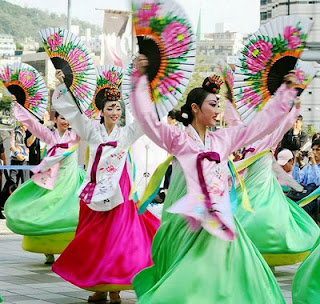 Like  turkey's importance in America, Korea also has a food that is representative during Chuseok. Songpyeon, the food of Korean Thanksgiving, is a ball of rice or rice powder filled with sesame seeds, beans, rice beans, and chestnuts. While they steam, pine needles are added to the top to create a beautiful and mouthwatering fragrance. It is tradition that whoever makes the best songpyeon will meet an attractive spouse, if single, or give birth to a beautiful daughter, if married or pregnant.

The Chinese Welcome the New Season with the Mid-Autumn Festival 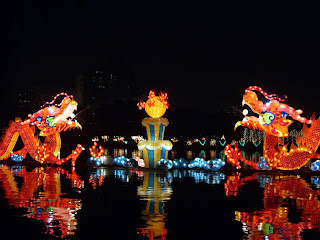 Beginning on the 15th day of the 8th lunar month, China welcomes one of its most beloved and anticipated festivals, the Chinese Mid-Autumn Festival. Deeply imbedded with rich Chinese tradition and culture, it has often been dubbed as one of the most important of the traditional Chinese events. Not only that, but it is also one of the most fun and exciting!

The holiday is also subject to several other titles, including the Moon Festival, Mooncake festival, and the Lantern Festival.

Three fundamental concepts revolve around this special day; gathering, giving thanks, and praying. These three ideas have been a critical component of the Mid-Autumn festival and carried throughout the centuries since it's origin during the Shang Dynasty.

One of the most important parts of the festival, as you may have guessed by the different names it's given, is moon worship. In ancient China it was believed that there was a connection between the moon and water that provided you with rejuvenation. Due to these beliefs, it became very popular for women to give offerings and worship the moon on the night after it was full. 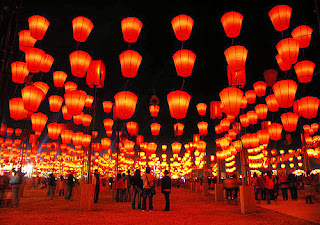 Modern day celebrations still involve offers of rice and wheat being made to the moon, but it also has introduced many new activities over the years. Some of these include parades of lanterns of various sizes, colors, and shapes as well the displaying of handcrafted lanterns, an art form that is heavily emphasized on this day despite its unfortunate decline in popularity in recent years.

One of the most popular and important activities during the Mid-Autumn Festival is the creation and passing around of moon cakes. Originally, moon cakes were "sacrificed" to the moon during this time as a thank you for that year's fall harvest, since the ancient Chinese people believed the full moon was heavily connected to the changing seasons and 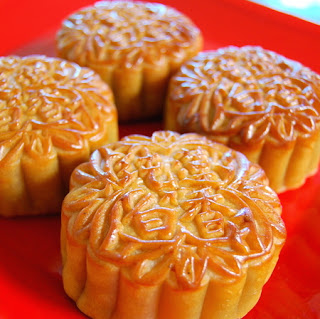 agriculture.  Today, they are still offered to the full moon but also just eaten in celebration with friends and family. The inspiration for the shape of the cakes comes, of course, from the shape of the moon but also from the idea that a circle symbolizes the coming together of family. In addition to enjoying the cakes amongst each other, people also give them as gifts to friends to wish them a long and fulfilled life. 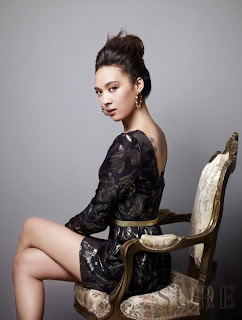 As usual, the K-pop world is all a buzz with news of singles, music videos, and general updates pouring in by the minute. Its always an exciting day when it has to do with this increasingly popular genre. Rising stars, such as Girls Generation, Yoon Mi Rae, G-Dragon, and more rack up millions of views on YouTube from viewers and fans around the world. With these talented artists stepping on to the scene, K-pop is a trend that is sure to keep getting trendier.

As of a few days ago, the beautiful and talented Yoon Mi Rae scored a place at number one on the K-Pop Hot 100 thanks to her emotional and heartfelt new track "Touch Love". Due to her chill-inducing vocals and touching piano ballad, this single can definitely be expected to have a place on the Hot 100 for quite some time.

For any American fans of Vixx, today is your lucky day! The K-pop boy band has just recently announced two stops in the U.S. during their "Milky Way" tour this fall. First the group will hit Dallas on November 8th at the Grand Prairie Theatre then make their way to 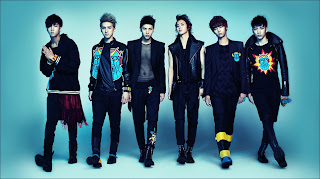 Los Angeles for another performance at the Club Nokia on the 10th. So if you're a Vixx fan or even a K-pop fan in general, make sure to buy your tickets before they sell out!

For GI (Also known as Global Icon) fans, the wait is finally over! The all-girl K-pop group has recently released a music video for their hit track "Don't Lie". Thanks to some killer dance moves and catchy lyrics, the music video is already blowing up the internet.

Posted by Fujimini Island at 1:53 PM No comments: 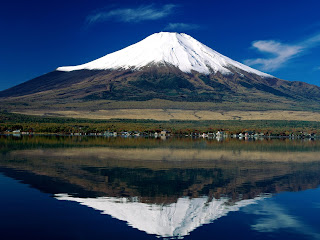 Standing at a staggering 12, 389 feet, Mount Fuji, located on the Honshu Island, wins the title as the highest mountain in Japan. Besides it's height, the mountain is also loved and recognized for its impossibly symmetrical peak and breathtakingly beautiful snow caps. Because of this aesthetically pleasing uniqueness, the mountain is often the center of many art pieces and photographs. It is also the destination of thousands of eager tourists from around the world.

In addition to being deemed one of Japan's Three Holy Mountains (alongside Mount Tate and Mount Haku), on June 22 2013, Mount Fuji was also added to the World Heritage List as a Cultural Site. This recognition has had many positive components to it, such as increased national pride and tourism, but it has also contributed to a rising problem Japan has been dealing with regarding the preservation of the mountain's natural beauty. With the curiosity of thousands of tourists comes a price for the environment, such as mounting trash, poor air quality, and constant "suburban sprawl". 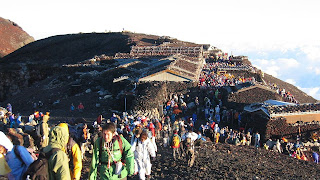 Though overwhelmingly grateful about the recognition, it is hard for the Japanese people not to feel some concern over whether the popularity this title has sparked will ultimately lead to the destruction of what made a national landmark in the first place. Officials have made countless efforts to improve and maintain the quality of the environment without reducing traffic of tourists. Low-waste toilets have been installed on various points on the mountain, hybrid buses shuttle the visitors to the trails, and thousands of volunteers work to pick up trash left behind by tourists. An additional effort has recently been put in place this summer where climbers are asked to pay a fee, which will all be donated towards the effort to preserve the natural beauty Mount Fuji has to offer.

When asked about his opinion on the matter, the head of Whole Earth Nature School, Keisuke Tanaka, says that donations should be used to "improve trails and toilets and add 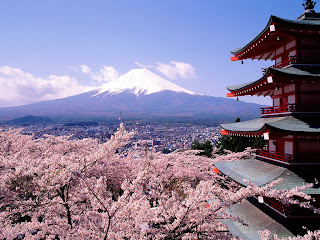 waste treatment facilities and multilingual signs." He also believes the government should step in and begin to limit the number of people allowed to visit the landmark.

Since making the cut for the World Heritage list, more and more measures are being taken to make sure people are treating this place with respect and care. New guidelines have been released stating that hikers must submit their plans in writing and are required to carry the proper equipment at all times. This is not only to protect the environment, but also to keep people safe!

It is crucial for people to work together towards the preservation of the beautiful nature Mount Fuji and other international landmarks have to offer!
Posted by Fujimini Island at 4:08 PM No comments: