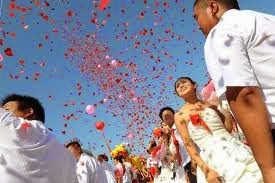 The Chinese are welcoming the arrival of August through the celebration of the annual Qixi Festival. The festival, also known as the Qiqiao Festival, is celebrated by the Chinese every summer on the seventh day of the seventh month, which falls somewhere during early to mid August. Other names for this exciting holiday include the Double Seventh Festival, representative of the holiday’s occurrence on both the seventh day and seventh month. Qixi literally means the Night of Sevens.

As one can expect with most Chinese holidays and festivals, many traditions and rituals are associated with the Double Seventh Festival. It is celebrated by all Chinese, but particularly important to girls and newly-wed couples. On this day, young girls go to their local temple to pray for wisdom. As they burn paper items as offerings, they wish and pray to marry someone who will be a good and loving husband.

Newly-weds are to worship and pray to Zhinu and Niulang, the mythological couple the holiday is associated with, for a long and happy marriage. Offerings can be made to the famous couple of fruit, flowers, tea, and face powder. Once the offerings have been completed, half the face powder is to be put on the new bride and the other half thrown on the roof. It is an interesting tradition, but said to bind the woman with the beauty of Zhinu. 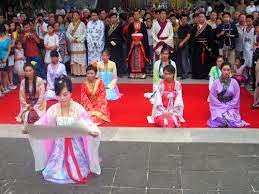 For these couples, the holiday represents the symbol of a successful marriage and shows that the bride is treasured by her new family.

The Qixi Festival is associated with many traditions but there are century-old legends behind those traditions and celebrations. To learn more about the legend behind the Qixi, or Double Seventh Festival, keep a look out for the second part of this blog!

Posted by Fujimini Island at 1:31 PM No comments: 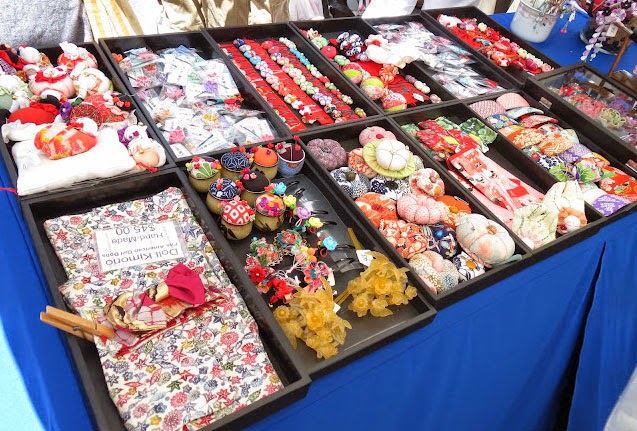 Starting tomorrow and going until the 20th of July is the “Hand Made in Japan” Festival. The huge festival celebrates Japan’s most beautiful arts as well as the artists behind them. Taking place in Tokyo Bay, the annual festival introduces over 3,000 of Japan’s finest artists.

Attendees are given the chance to not only look at, but purchase, a wide variety of arts and crafts, as well as attend demonstrations and participate in workshops. Once visitors have explored the seemingly endless selection of already made crafts, they can test out their own inner-artists at any of the 20 themed workshops provided in the Tokyo Big Sight Atrium. 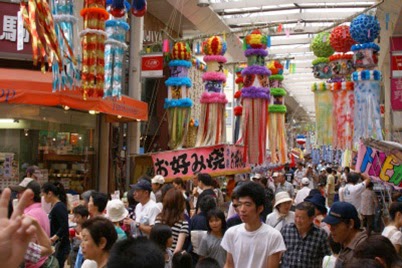 After trying out one (or all) of the workshops, attendees can continue through the halls of artwork towards the West Exhibition Hall. This area of the festival houses around 2,200 booths all offering original works ranging from fashion accessories to household decorations. Finish out the amazing day by attending one of the live concerts or a paining session. And would any Asian festival be complete without food? Absolutely not! A wide array of food and beverages from different regions of Japan are also provided while visitors explore the halls.

One of the special elements about Japanese art is the rich history behind it. With almost all ancient Japanese art, there is a story that comes with it. Those stories are woven through the Japanese people and their culture- thus making their art feel more personal. And what better way to display hand-crafted ornaments with a history than through a large festival where thousands of eyes can appreciate it. Often it is festivals like these that keep culture alive as time goes on.

Learn more about the award-winning Fujimini Adventure series.  Purchase the books here
Posted by Fujimini Island at 5:46 PM No comments:

Two adorable kids have stolen the Internet, receiving over 2 million views on YouTube in just a month, but not just due to their cuteness but also their dance moves. The pint-sized pair blew away the crowd at the Israeli Salsa Congress with their incredible salsa moves. The routine wasn’t just impressive for small children, but for even an adult dancer, which makes it all the more awesome.

Since they went viral, the two, named Kevin and Beberly, have won international competitions and even made an appearance on the Ellen Show.

Click below to watch the video that made Kevin and Beberly an overnight internet sensation:

Posted by Fujimini Island at 4:38 PM No comments: 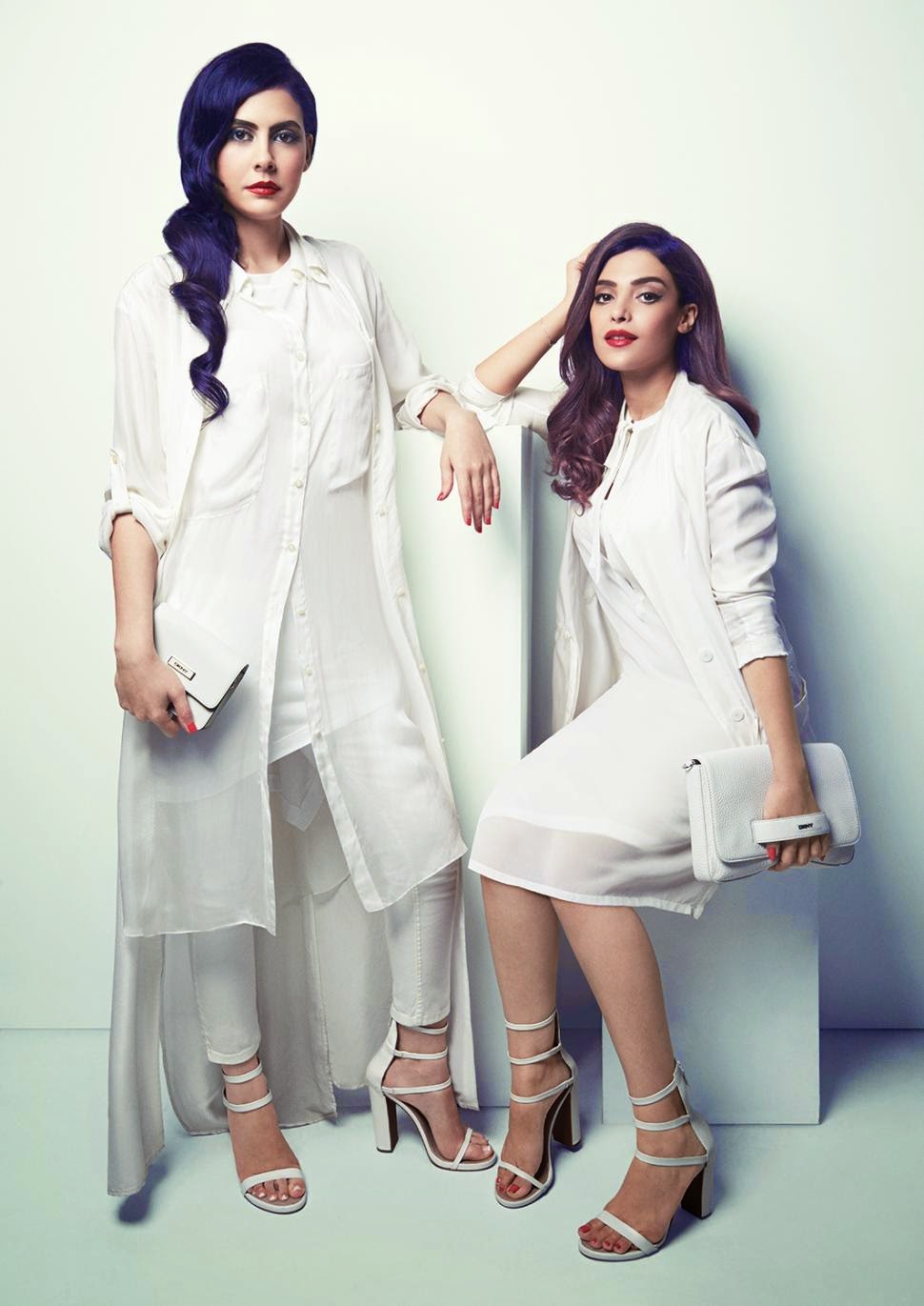 Ramadan is the ninth month of the Islamic calendar. All over the world, Muslims honor this special time through a month of fasting. Beginning June 28th and lasting through July 28th, Muslims have been fasting from sunrise to sunset.

Other observations of Ramadan include increased prayer and recitation of the Quran. The purpose of such activities is to improve and increase worship and devotion, as well as participate in spiritual reflection. Exercising restraint from other activities, such as drinking, arguing, or engaging in sexual activities, enables the mind to focus more on their spiritual improvement.

Although Ramadan is a time of great spiritual development, it is important to be cautious when eating and drinking so little in the hot temperatures of summer. But often, it can be difficult for Muslim women to stay cool while meeting the Islamic guidelines. DKNY has tried to combat this issue by releasing a line of clothing designed specifically for Muslim women, not just during Ramadan, but for all year round.

The best part is that the designers were Muslim women themselves. And in addition to being Muslim, these women are also professionals in the fashion industry. So they not only are up to speed on all the latest trends, but they are experts in the context and requirements of Islamic dress. 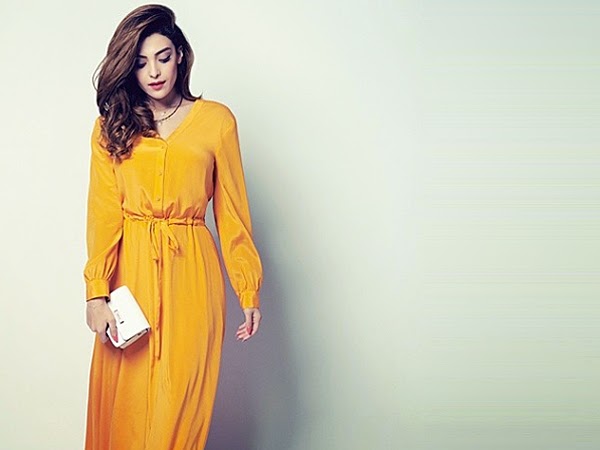 The collection is stunning without crossing any lines. Arms and legs are covered, plunging necklines are not a problem, and slips are added so light doesn’t shine through- all while being chic and trendy. One of the major complaints of a lot of the fashion choices given to Muslim women is that they are bag-like and plain, but these clothes drape around the body, encasing the curves nature gave women without making them obvious or inappropriate.

DKNY has opened the doors of designer fashion to something amazing, and it is my hope that other big name companies will soon follow suit. 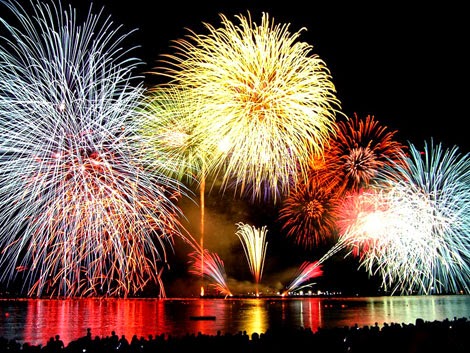 One of the most memorable parts of summer is only days away. Since I live in a beach town, I’m mentally bracing myself for the influx of tourists, vacationers, and partiers that is sure to happen tomorrow. On Friday thousands of people across the country are going to be hitting the beach, barbecuing, attending carnivals, getting well acquainted with beer, and celebrating all that is America. Aside from hot dogs, hamburgers, and beer one of the most common (and most looked forward to) aspects of the Independence Day holiday are fireworks. Without fireworks the Fourth just wouldn’t feel complete. But where did our explosive entertainment come from?

While some argue their roots can be traced back to India or the Middle East, most historians believe fireworks originated in China. As early as 200 B.C. Chinese villagers stumbled upon naturally occurring firecrackers and began using them during rituals and cultural ceremonies. To make the delightful noise that everyone seems to love, they would roast bamboo, which explodes and creates a loud bang when it is heated due to its hollow air pockets. The people believed that these loud explosions would scare and ward off any evil spirits lurking nearby. 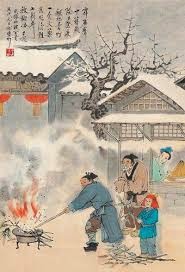 As with many people throughout history, eventually curiosity and science came into play and Chinese chemists mixed together saltpeter, charcoal, sulfur, and other things to create an early form of gunpowder. They then stuffed the new substance into their bamboo sticks before throwing them into a fire. Thus, the first fireworks were born.

From that moment on, fireworks became a huge part of celebrating events, particularly military victories and religious ceremonies. So how did they make their way overseas and become part of our Independence Day celebration?

Fireworks have been a part of our Fourth of July since the very first one. It was John Adams who was the first to propose having fireworks become part of the celebrations. In a letter to his wife he wrote, “The day will be most memorable in the history of America. I am apt to believe it will be celebrated by succeeding generations as the great anniversary festival. It ought to be solemnized with pomp and parade…bonfires and illuminations (a term for fireworks)…from one end of the continent to the other, from this time foreword forevermore.”

And it looks like John Adams was right because on each anniversary of the 4th to this day fireworks have lit up our sky in celebration of our independence as a nation.

Learn more about the award-winning Fujimini Adventure series.  Purchase the books here
Posted by Fujimini Island at 11:06 AM No comments: