Christmas in Asia: How the Chinese Celebrate the Holiday 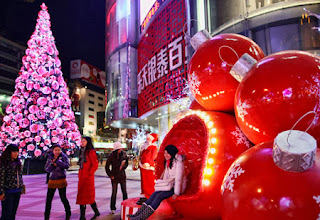 Our last stop for Christmas in Asia is Christmas in China. Although Christmas has some presence in China, it is not as widely celebrated or acknowledged as it is in Korea or Japan. Most shops, schools, and offices remain open- as it is not considered an official holiday. Despite this, some elements of a Western Christmas can be found in China around this time of year.

Large shopping centers and department stores are often decked out in Christmas decorations in acknowledgement of the holiday. Everything from Christmas trees, to lights, to other various decorations are put up around the end of November to bring on the season. Even a few homes get into the spirit of Christmas, hanging Christmas lights around the outside of the house or putting up a small tree inside. China even has their own version of Santa Claus, who spends his time visiting hotels and malls across the 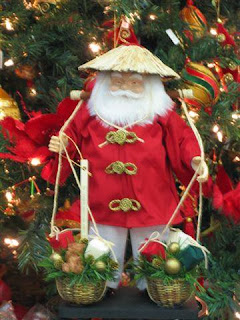 country. Rather than being accompanied by elves, the Chinese Santa travels alongside his sisters- women dressed in red and white skirts. Traditionally, the Chinese Santa does not leave presents or accept treats of milk and cookies but he will pay a home visit to take pictures with excited children.

Despite the small size of Christmas in China, emphasis on the holiday is increasing each year. Many families now gather together on Christmas Eve for a special dinner with friends. Close friends and family often will exchange cards or small gifts. Hotel restaurants and Western restaurants will almost always feature a traditional Christmas dinner and other festive treats during this time. Many Chinese people love to go on shopping sprees during the November and December months. Another seasonal favorite, ice skating, is available at special locations that are set up exclusively for the Christmas season, such as at Weiming Lake at Peking University in Beijing.
Posted by Fujimini Island at 6:27 PM 1 comment:

Christmas in Asia: How Koreans Celebrated the Holiday 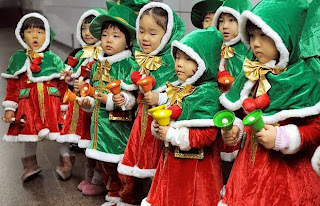 Although Korea is officially Buddhist, today about 30% of the South Korean population is Christian. Korea has become known as the only East Asian country to recognize Christmas as a national holiday. Despite many similarities to how Christmas is celebrated in the West, Christian Koreans still put their own cultural spin on the beloved holiday.

Christmas, or Sung Tan Jul as it is called in Korea, is considered primarily a religious holiday, so although some families do put up a Christmas tree and exchange presents, most of the celebration revolves around attending mass on Christmas Eve or Christmas day. 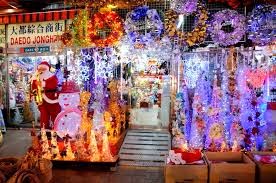 Santa Harabujee is very popular among Korean children, handing out presents to children wearing a red or blue suit. Around the holiday season, many stores employ Santas to give out chocolates and candies to shoppers. Some families celebrate Christmas dinner with gatherings at the home but traditionally many Korean families prefer to go out for dinner. Christmas is seen as a holiday for love and romance, making it one of the busiest times of the year for restaurants. 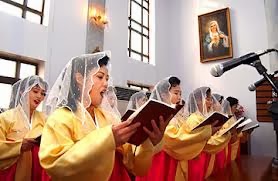 much of the time, Christmas represents a time of celebration with friends and lovers, especially for younger people, while New Years is the time for family. Presents are exchanged on Christmas Eve and rather than receiving piles of presents, it is customary for people to each receive one present, often times a gift of money.

Posted by Fujimini Island at 6:15 PM No comments:

Christmas in Asia: How the Japanese Celebrate the Christmas Season 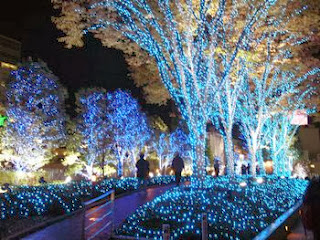 Although the most important holiday of the season in Japan is New Year's Day, Christmas is still something on the people's minds this time of year. In Japan, certain Christmas symbols, traditions, and practices are carried over from Western Christmas traditions and given an "Asian flare", while others are unique to their culture and traditions.

Much like in the United States, the ideas of having holiday spirit and the gift of giving is a very strong concept during the Christmas season for the Japanese. Participating in worship and giving to the sick and poor is the main focus of Japanese Christians around this time of year. 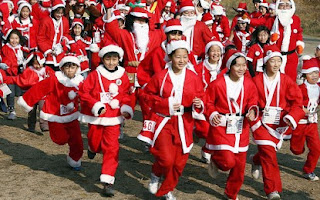 Christmas day also shares many similarities to what your family's typical Christmas may be. Family members gather together over a turkey dinner to exchange cards and gifts. A Christmas tree can still be found in the house, decorated with an abundance of lights and ornaments. A special corner of each house is reserved for a Nativity scene- even mistletoe and evergreens are a symbol that Japanese Christians hold dear for this holiday. Hoteiosho, a Buddhist monk who is the Japanese equivalent of Santa Claus, showers the well behaved children with presents on Christmas morning. 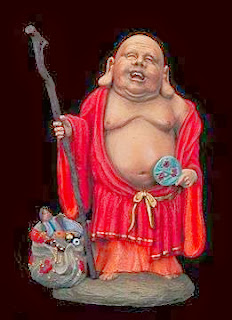 Even though many Western customs carry over to this holiday, there are still many Asian traditions that are woven into the season. The Japanese incorporate their rich tradition through their unique Christmas cakes, fried chicken, and Daiku. Their traditional Christmas cake is made from sponge cake decorated with miniature figures of trees, flowers, and Hoeiosho or Santa Claus. In addition to turkey, fried chicken has become a traditional meal for the holiday meal. The music favorite of the season, the Ninth Symphony of Beethoven, Daiku, can be heard playing in many houses  and at many holiday get togethers.