Fujimini Island has Pandas - Do you know Pandas? 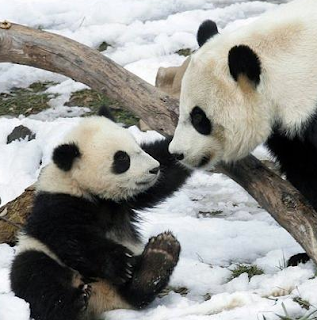 On Fujimini Island Pandas climb the slopes. Pandas live in the bamboo forests of China. The Pandas have lived in these misty forests for many, many years. The Chinese honor the pandas and pandas are protected because they have become rare. Pandas are almost extinct. There are only about 1,000 living in the forests of China.

The Chinese have known about the panda for a long time. But people in the West just discovered the panda when a German zoologist happened to see one at the beginning of the 20th century. A zoologist is a scientist who studies animals. There are actually two types of pandas: giant panda and red pandas. Giant pandas are as big as American grizzly bears. They can stand up to six feet tall and weigh almost 300 pounds.

Posted by Fujimini Island at 2:57 PM