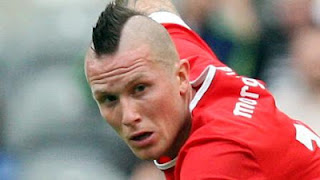 Following Greek triple jumper Voula Papachristou, Swiss soccer player Michel Morganella, has also been kicked out of the Olympics for a racist tweet. He was stripped of his Olympic accreditation shortly after Switzerland lost to South Korea when he tweeted that South Koreans can "go burn" and referred to them as a "bunch of mongoloids." The 23-year-old athlete later apologized at a news conference. He stated that he is "sincerely sorry for the people of South Korea, for the players, but equally for the Swiss delegation and Swiss football in general. It's clear that I'm accepting the consequences. After the disappointing result and reaction for Korea that followed, I made a huge error."
To learn more about Asian themes, culture and diversity, please visit Fujimini Island, find Fujimini Island on Facebook, follow Fujimini Island on Twitter.
Regarding the tweet, Swiss Olympic team chief Gian Gilli commented that Morganella "discriminated against, insulted and violated the dignity of South Korea football team as well as the South Korean people." He further explained that he felt Morganella had been provoked by comments sent to his Twitter after the game, but under terms of the International Olympic Committee's code of conduct, they had no alternative but to send him home. South Korean fans were very angered, commenting that they felt looked down upon by Morganella.
To learn more about this article and Eileen Wacker's acclaimed book series,  visit ONCEKids, ONCEKids on Facebook,  ONCEKids on Twitter.
Coach Pierluigi Tami stresses the importance of remembering the spirit of the games and not getting to wrapped up in the drama in his statement, "We have to focus on the game. The other stuff we don't want to think about. Maybe we shouldn't read any newspapers for the next two days."
Posted by Fujimini Island at 12:16 PM