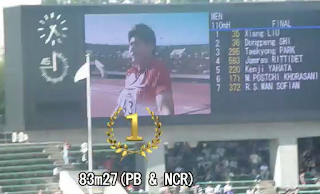 Javelin star Yukifumi Murakami, who was the captain for Japan at the Asian Games in China two years ago, has once again been selected to lead Japan at this summer's London Olympic game. He seems cool under the pressure, as he says he is very much looking forward to his role as a captain. He has participated in the games for the last three consecutive Olympics and welcomes this challenge excitedly.
To learn more about Asian themes and culture, please visit ONCEKids, ONCEKids on Facebook,  ONCEKids on Twitter.
Earlier this month, Murakami's 12-year reign as the national javelin champion ended when Waseda University studen, Genki Dean, passed Murakami's 83.95 meter throw. Murakami, who injured his right elbow during the national championships, still received a place on the team and was named captain, while Dean found himself an automatic spot in the London Games for his performance. Despite the previous rivalry, Murakami says he is thrilled to have Dean by his side for the games.
Posted by Fujimini Island at 4:39 PM