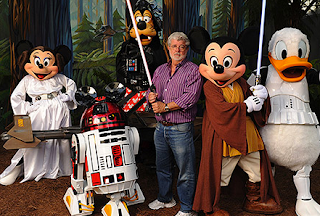 Star Wars fans are all shocked, and many angered, by Disney's recent announcement of their $4.05 billion purchase of Lucasfilm LTD, which includes the Star Wars franchise.

Disney's additional revelation of their intentions to create a Star Wars Episode 7 created another wave of mixed responses from fans. The target release date for the new film is set for 2015 and Disney tells the public to expect a continuation of the Star Wars saga "well into the future"- up to three more films!

Starting with the release of Star Wars Episode 7 in 2015, Robert Iger, Disney's CEO, says there are plans in the making to have a new Star Wars episode released every two to three years.


He adds that Disney also sees the saga as having the potential for a great T.V. series. Under Disney, Lucasfilm co-chairman Kathleen Kennedy will become the new president of Lucasfilm and serve as the brand's manager. 68-year-old founder of Lucasfilm, George Lucas, plans to retire but will still serve as a creative consultant to the new direction of Star Wars.


Kids, do your parents want you to learn more about the culture and diversity taught at Fujimini Island, please click here.


Regarding the sale of Lucasfilm to Disney, George Lucas says it is one of his "greatest pleasures to see Star Wars passed from one generation to the next. It's now time to pass Star Wars on to a new generation of filmmakers.

But will fans agree with his statement and decision to sell their beloved Star Wars saga to Disney?
Posted by Fujimini Island at 4:47 PM