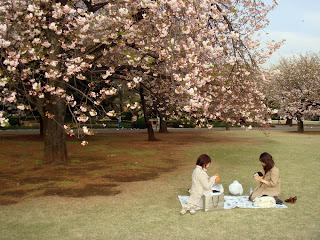 The pink and white blossoms of the Japanese cherry trees in Washington D.C. are breathtaking now that they've fully bloomed after a cold beginning to spring on the east coast. To any American passing by the blossoms they would serve as a pleasant sight, but to the Japanese, their presence symbolizes so much more than aesthetic beauty. They symbolize many aspects of Japan as a nation, as well as many of of the values that the Japanese hold dear. Their love and appreciation of the cherry tree dates back hundreds of years.

The connection between the Japanese and their beloved cherry trees stretches all the way back to 710, when the Japanese first began to plant cherry trees in residential areas, when before they had only resided in the mountains. The trees were considered sacred, for it was a common belief that they carried the soul of the mountain gods and brought them to humans. During the first few weeks of spring, many Japanese would make long journeys into the mountains to worship the trees. 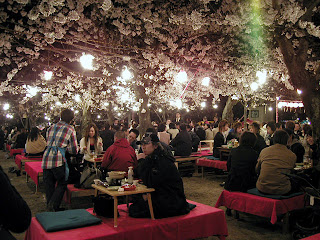 Cherry trees also serve as a symbol of the uniqueness of the Japanese culture. The first ever recorded reference to the cherry blossom was seen in 712 in the Kojiki. The Kojiki is a collection of oral accounts of the origins of Japan, nicknamed the "Japanese Spirit". During this time, the imperial courts held elegant cherry blossom viewing festivals, known as hanami. At these festivals the elite class would sing, dance, drink, and eat while enjoying the beauty of the cherry blossoms.

During the rise of the Feudal system and the samurai warrior, the cherry blossom became associated with courage and a noble character. They were said to represent the Japanese soul, which was a man who did not fear death. 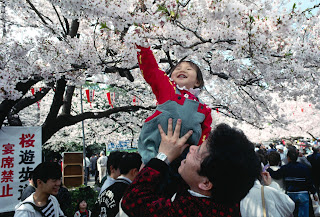 Even today many Japanese people participate in the special cherry blossom viewings, referred to as hanami. Companies and neighborhoods organize group visits, students are even exempt from classes for the day in honor of the occasion.