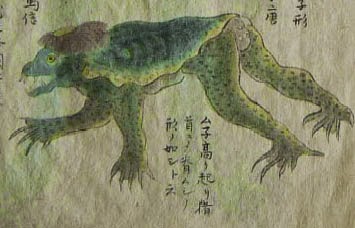 One of the characters OnceKids’ author, Eileen Wacker, features in her most recent addition to the Fujimini Island Adventure Series, “Blue Penguin and the Sensation Surf”, is the Kappa. The Asian inspired Children’s series features many themes and terms from Korean, Chinese, and Japanese culture, so not all of the terms may be familiar to you. One of which is probably the Kappa, at least it was for me.

The Kappa, which translates to “river-child”, is found within Japanese mythology and folklore. Also referred to as Kawataro or Kawako, the Kappa represents a mythical creature depicted as water-dwelling, about the size of a child with scaly, reptilian skin ranging from green to yellow in color. Their appearance ranges greatly from region to region but certain consistencies can be found, such as a carapace, a beak, and a flat hairless region on the top of their head filled with water. The water-filled plate on the top of their head is claimed to be their source of power. If the region dries or loses some of it’s water, the Kappa will be weakened and lose it’s power. Although mischievous, Kappas are notoriously polite, so according to legend, you can trick him into bowing low enough to spill his water.

To learn more about the characters and world of Fujimini Island, click here

Kappas are generally regarded as troublemakers who like to do pranks on people. The Kappas pranks can range from innocent to malevolent depending on the type. Historically parents warn their children about the Kappa who will pull naughty children under the water. It was not uncommon for people to throw cucumbers into river waters to please the Kappas, who love to eat cucumbers almost as much as children, and avoid any trouble. 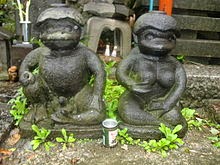 But not all Kappa are viewed as bad or trouble, some quite the opposite. Many are said to be curious about human civilization and are able to speak Japanese. If one was able to befriend a Kappa, they allegedly would help farmers irrigate land and bring gifts of fish. They are traditionally said to be intelligent creatures highly knowledgable in medicine, and were even responsible for teaching bone setting to humans.

To find the book series that inspires these stories, click here
Posted by Fujimini Island at 1:21 PM