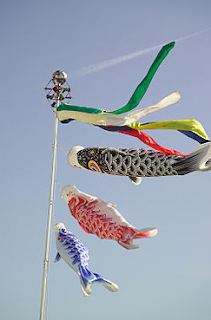 This week on the ONCEKids blog, Golden Week is discussed.  Click to learn about Golden Week's Green Day.
Golden Week in Japan is concluded with the national holiday known as Children's Day! This is a day dedicated to the celebration of the healthy growth and happiness of children by their families. It became a national holiday in 1948, but has been celebrated by families in Japan since ancient times. It is suspected that the celebrations began during the reign of Empress Suiko, who ruled from 593-628 A.D. It became assigned to the 5th day of the 5th month after the Nara period.
To learn more about the author of this article Eileen Wacker and her acclaimed book series,  visit ONCEKids, ONCEKids on Facebook,  ONCEKids on Twitter.
Traditionally, the 5th of May was called Tango no Sekku and was a festival exclusively for boys, while girls had a festival that occurred on March 3rd. It has since been changed so May 5th includes both boys and girls.
On Children's Day, families with children fly carp-shaped steamers outside the house and display dolls of famous warriors inside. Families also often take baths sprinkled with iris leaves and roots. The iris is thought to promote good health and ward off evil. It is also traditional to eat rice cakes wrapped in oak leaves and filled with sweet bean paste, called kashiwamochi.
To learn more about Asian themes, please visit Fujimini Island, find Fujimini Island on Facebook, follow Fujimini Island on Twitter. 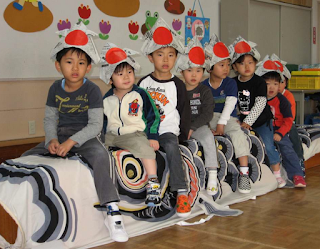 Each year, there are many events to highlight and celebrate children on this day. Kyogen, a type of comic theater, was founded around 600 years ago and is performed with traditional costumes and distinctive styles of acting. One year, at the Yokohama Noh Theater, a kyogen recital was held featuring 18 actors between the ages of seven and thirteen. The kids had attended practices one or twice a week since the previous summer to learn the unique comic expressions, movements, and uses of the fan. The theater was packed with friends and parents, both entertained and impressed by the children's performances.
This national holiday, celebrating children around Japan, is the perfect way to end the week of celebrations and festivities known as Golden Week!
Posted by Fujimini Island at 4:35 PM