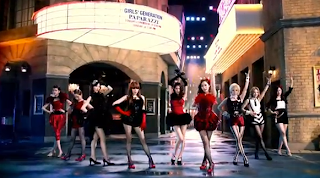 As to be expected, K-Pop's growth and popularity has only speeding up not slowing down in the last few months. Stars such as the group Girls' Generation, Electroboyz, and F(x) have flourished within the K-Pop industry due to recent successful performances.
Girls' Generation is heating up! The group appeared on the June 22nd edition of the very popular Japanese music program, 'MUSIC STATION', performing their track "Paparazzi." Alongside bands such as Linkin Park, KAT-TUN, AKB48, Maeda Atsuko, and Kuwata, the girls demonstrated their tremendous talent during the episode. The group has also recently released a "gold" dance version of "Paparazzi" PV. The "Paparazzi" PV is the group's largest-scale music video yet. Over 30,000 lightbulbs, 300 cast members, and 120 staff members are included on the set of this new hit. The track will be officially released on June 27th.


To learn more about Asian themes, please visit Fujimini Island, find Fujimini Island on Facebook, follow Fujimini Island on Twitter.
Electroboyz are also shining in K-pop with the release of the track "Imma Take You Home." The song went public on June 18th in celebration of the 2nd anniversary of the group. Extra member clips of the music video have also now been released. The original music video heavily focused on the boys as gentlemen, while the new clips attempt to show their "bad boy" side.


To learn more about this article and Eileen Wacker's acclaimed book series,  visit ONCEKids, ONCEKids on Facebook,  ONCEKids on Twitter.
F(x) is having a great month in K-Pop when they swept the crowd off their feet during their performance on KBS' 'Music Bank'. It was a tough competition with other talented groups performing, such as After School with their big comeback performance of "Flashback". Wonder Girls and F(x) faced off to be on this week's 'K-Chart" but in the end it was F(x) to steal the spotlight with their performance of "Electric Shock".
Click here to see the official music video of Girls' Generation's hit "Paparazzi":

Posted by Fujimini Island at 10:36 AM