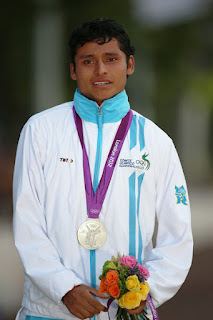 History continues to be made at the 2012 London Olympics with a victory by Erick Barrondo. The 21-year-old one a silver medal in the men's 20km walk, finishing behind China's Chen Ding. This achievement marks the first ever Olympic medal for Guatemala, who have been in the Olympics since 1952. Barrondo speaks about his victory saying, "I can't believe it; I am very happy. I have made history for Guatemala. I thank my coach and all the people who supported me and who helped me achieve this victory."
To learn more about themes of culture and diversity, please visit Fujimini Island, find Fujimini Island on Facebook, follow Fujimini Island on Twitter.
Guatemala's President Otto Perez Molina called Barrondo to congratulate him on his race and medal. Barrondo further comments about his race saying, "It was a glorious day for me, but the glory is most of all for my country. The president congratulated me on the first Olympic medal for the country. He told me that everyone had come out on the streets to celebrate the triumph."
To learn more about this article and Eileen Wacker's acclaimed book series,  visit ONCEKids, ONCEKids on Facebook,  ONCEKids on Twitter.
It is a proud summer for Barrondo and Guatemala!  ONCEkids Publishing celebrates the achievement of a small country winning their first medal in the very competitive Olympic games!
Posted by Fujimini Island at 1:43 PM