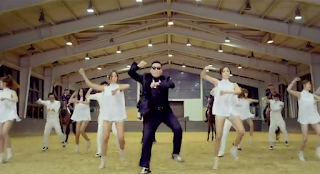 K-Pop artist Psy is making history with his new hit 'Gangnam Style' in not only South Korea, but around the globe. No other K-Pop artist has been able to compete with IU's track 'You and I" which was on the top chart for a solid five weeks -- until Psy came along. He is now tied with IU and as the 6th week mark grows closer, he may find himself the number one artist on the K-Pop Hot 100. And this track isn't just blowing up in South Korea, it has crossed international language barriers, finding itself number two on the YouTube Music Chart. Coming only after Carly Rae Jepsen, Psy is ahead of Justin Bieber, One Directions, and Katy Perry's music videos with an astonishing 60 million views, which continues to increase daily.
For more on K-Pop, please visit Fujimini Island on Facebook and Twitter.
His new track and dance video features an easy-to-learn dance to a trendy electropop beat. Many writers are calling Gangnam Style the breakthrough track for K-Pop in the United States. Psy has shown an interest in increasing the track's popularity in America with several appearances on TV discussing the music video and showing off his dance moves.Some believe in order to truly breakthrough to the States, a follow up hit and a successful tour are necessary, but others think the 60 million views speak for itself. Either way, this is definitely a great time for Psy and a great time for K-Pop!
To learn more about the cultural and diversity taught at Fujimini Island, please click here.
Check out the music video for Psy's 'Gangnam Style' :
Posted by Fujimini Island at 4:35 PM