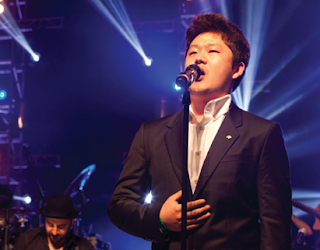 For much of Sung Bong Choi's life he lived in the streets, orphaned at only three years of age. He was dropped off at an orphanage, but was often badly beaten, so he ran away to live alone in the red light district of Daejeon -- at just five years old. Many nights he would sleep in a public bathroom or cardboard box on the side of the road, selling gum and energy drinks to get by. Until he was 14, Choi did not even know his own name- fast forward eight years and he is a YouTube sensation.

In the summer of 2011, Choi's heartbreaking story and raw talent brought him through finals on Korea's Got Talent  and got him 66 million views on YouTube. But what has happened to him since these life changing events?

Since gaining second on Korea's Got Talent, Choi's popularity has exploded, even being nicknamed the "Korean Susan Boyle". Only one year after his performance, Choi took America by storm, performing on stage for the first time in the United States. He took part in the international concert at the Greek Theatre in Los Angeles, a concert dedicated to promoting peace and unity. Surrounded by an ensemble of internationally acclaimed musicians, Choi performed, along with the others, "We Hear Your Voice." This ballad was written by international singer/songwriter Shani, with the goal of inspiring hope and unity.

In response to his newfound fame and his recent performance, Choi stated, "I felt the performance went really well. I'm so grateful to make my U.S. debut here. I know that many Americans saw my video on YouTube, so I was glad when I saw them at the concert."

To learn more about the cultural and diversity taught at Fujimini Island, please click here

The concert at the Greek theatre was Choi's first performance in America, but certainly not his first time on stage. This past year, Choi has performed in countless concerts, including a performance at Korea's Blue House. He has also appeared on T.V. shows and participated in many lectures. He now also has an autobiography titled "Just Live Without Conditions 'Cause You Only Live Once", telling of the hardships he faced before his fame, which moved its way right to the top of Korea's bestsellers list shortly after its release this past summer. Later this year he plans to release his first album, which will finally fulfill his long-awaited dream.

For those of you new to Sung Bong Choi's story, click here to see his inspiring performance on Korea's Got Talent- and be sure to have some tissues ready!

Posted by Fujimini Island at 9:13 AM