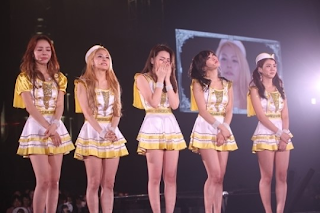 KARA changed the face of K-pop on the 6th of January by becoming the first Korean all-girl group to perform at the Tokyo Dome.

Performing a total of 25 songs, the girls included their hits like "Pandora", "Speed Up", "Winter Magic", "Jet Coaster Love", "Pretty Girl", and more.

To put a unique spin on their show, each KARA member also performed solo. The crowd went crazy when their hit song, "Mister", the song they debuted in Japan with, began to play. 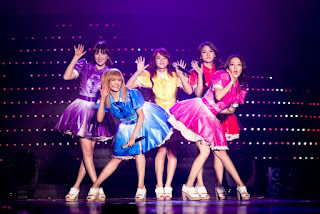 The show at the Tokyo Dome was a success for these rising stars. When tickets went on sale, the girls sold out all 45,000 tickets in an astonishing five minutes. The concert an Tokyo was just one of a six part tour in Japan. They started out in Yokohama, then moved on to Osaka, Nagoya, Fukuoka, and then finally Tokyo before moving on to their final destination.

Six cities, twelve performances, and 15,000 fans have been how these girls have kicked off their 2013.

Posted by Fujimini Island at 6:07 PM