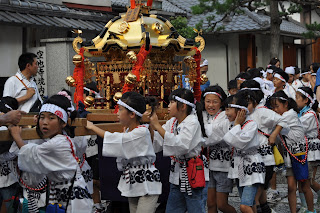 One of the most famous festivals in Japan is the Gion Festival, or Gion Matsuri, occurring in Kyoto. This festival, its name deriving from Kyoto's Gion district, stretches over the entire month of July.

The beloved festival originated as part of an ancient purification ritual to appease the gods responsible for fires, floods, and earthquakes. Now fast forward to today, and though it may not be celebrated as part of a ritual, it is still considered an important aspect of Japanese culture and tradition.

During this exciting time, Kyoto's downtown area is transformed in anticipation of the three nights leading up to the festival's most celebrated day, the Yamaboko Junko parade. During these three nights, referred to as yoiyama, the streets are lined with carts selling foods like barbecued chicken skewers, traditional Japanese sweets, and many other popular Japanese foods. The girls dress in traditional summer kimonos, or yukata, and walk around carrying with them traditional paper fans and purses. 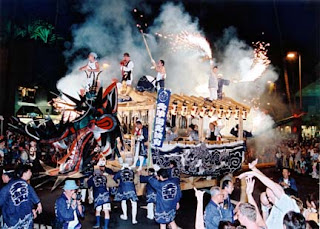 Also during these nights, many of the houses located in the old kimono merchant district will open their homes to the public, giving everyone a chance to view a traditional Kyoto residence. As enjoyable as these three nights are, the first one beginning July 14th, they are all purposed to lead up to the main event- the parade.

The Yamaboko Junko, occurring on July 17th, is the highlight of the Gion Festival. On this day thousands of people line the streets of Kyoto to get a look at the beautiful display of floats that pass by during the annual parade. The most priceless and exquisite Japanese tapestries drape these impressive floats, while dancers and musicians perform a skilled ancient ritual around them. 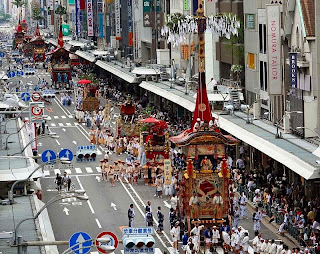 Smaller, but equally impressive, yama floats follow the larger ones. These represent life-sized mannequins of the ancient emperors, empresses, aristocrats, and deities.

This parade represents the beautiful collation of art, music, dance, and craftsmanship within Japanese history, tradition, and culture.