The Legend Behind the Moon Festival 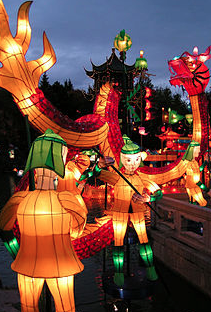 The Chinese Moon Festival, occurring on the 15th day of the 8th lunar month, is deeply imbedded with rich Chinese tradition and culture. It is often considered one of the most important of the traditional events for the Chinese, and also one of the most fun and exciting!

What makes this event so exciting and fills it with tradition are the legends behind the Moon Festival. One story says that Chang Er, the wife of a strong and tyrannical archer, flew to the moon, where she lives even today. Her husband had stolen the elixir of life from a goddess and Chang Er drank it in order to prevent her husband from being able to. It was her attempt to save the people from her tyrannical rule, and she soon found herself floating after consuming it so she decided to fly to the moon. Legend has it that you can see her dancing on the moon -- but only during the time of the Moon Festival. 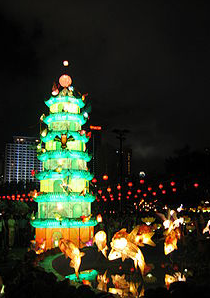 The second legend of the Moon Festival is the story of Wu Kang, a man who went to live in the mountains after deciding he wished to become immortal. In the mountains he went to live with an immortal to teach him. He was first taught about herbs to use to cure sickness, he was then taught to play chess. Wu Kang was an impatient, restless person and demanded to learn even more, so then he was given the books of immortality to study. He became bored within a few days and demanded more knowledge. Angered with him, his teacher banished Wu Kang to the Moon Palace and said he could not return until he chopped down a cassia tree. Each time Wu Kang chopped it down, the magical tree restored itself, so the story says he still remains at the Moon Palace chopping away.

Another legend, and our personal favorite here at ONCEkids, is of the Jade Rabbit. This story says that three fairy sages turned themselves into poor old men, begging a fox, a monkey, and a rabbit for food. The fox and monkey both gave him food, but the rabbit, having no food, instead sacrificed his own life for the beggars. Touched by his sacrifice, the fairies let him live in the Moon Palace, becoming known as the "Jade Rabbit".
Posted by Fujimini Island at 10:44 AM