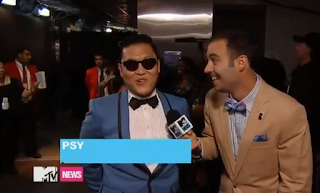 K-pop artist Psy has taken over the web with his music video sensation, Gangnam Style but last night his career went to the next level when he appeared on MTV's Video Music Awards.

His appearance on the stage next to Kevin Hart was a surprise -- but an exciting one at that. His fun and easy-to-learn dance is always a crowd pleaser and continues to grow in popularity. When asked about his experience at the VMAs Psy responded, "I cannot believe what's going on. The increase in people knowing who I am is incredible. I did not expect things like this. I just made a video in Korea and uploaded it and within 50 days, I'm here now." Psy says we can expect many more pop songs from him in the near future- in Korean as well as some English.

Congrats to Psy for his success and his appearance at the Video Music Awards, we at ONCEKids are routing for Psy as we eagerly watch his popularity continue to grow!

Posted by Fujimini Island at 5:37 PM